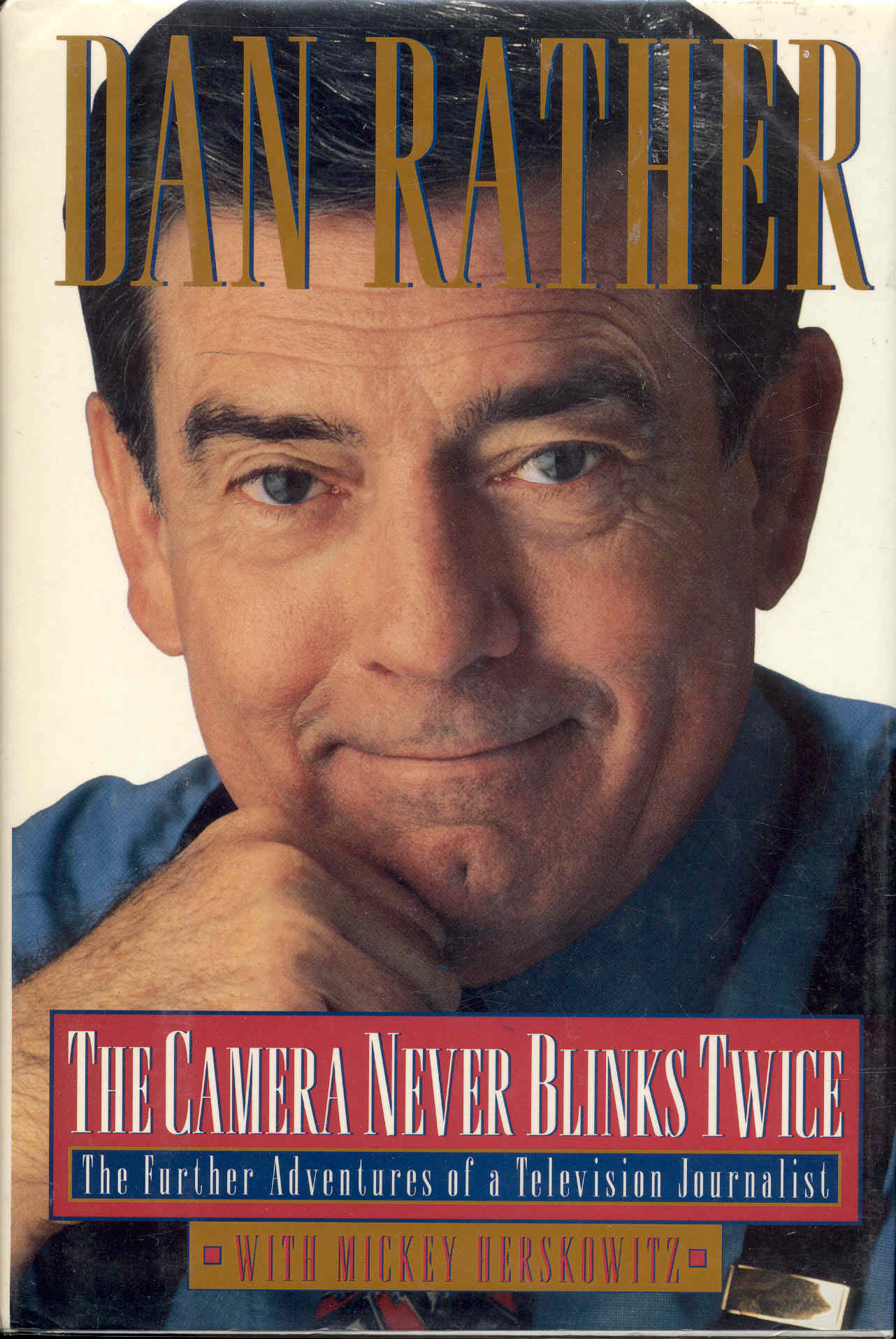 The Camera Never Blinks Twice: The Further Adventures of a Television Journalist

By: Dan Rather with Mickey Herskowitz

C2 - A first edition (stated with complete numberline) hardcover book SIGNED and dated by Dan Rather with "Semper Fi -" written on the half-title page in very good condition in very good dust jacket that is mylar protected. Dust jacket has some wrinkling and chipping on the edges and corners, an inch line scratch on the back, tanning and light shelf wear. Book has some bumped corners and small dog-eared pages, some light stains on the page edges, light discoloration and shelf wear. With the energy, integrity, and honesty that have been his trademarks, Dan Rather provides remarkable insight into the news of the world - and the world of news. 9.5"x6.5", 368 pages. Satisfaction Guaranteed. Reporting every night to more than 13 million people on the CBS Evening News, Dan Rather has been called "outrageous, outspoken, but never outclassed." In The Camera Never Blinks Twice he tells exhilarating and thought-provoking tales that provide ample evidence of why he's earned the reputation of premier newsman of his generation. When Dan Rather's now-classic book The Camera Never Blinks was published in 1977, The Washington Post Book World wrote: "The Rather-haters will find plenty to hate. The Rather-lovers will find plenty to love. And those who always ask 'What's Dan Rahter really like?' will have their curiosity satisfied!" Now, seventeen years later, Rather picks up where he left off in The Camera Never Blinks, which sold more than one million copies and spent twenty-four weeks on the New York Times hardcover best-seller list. In The Camera Never Blinks Twice, he narrates spellbinding stories from the front lines of some of the most dramatic events of our times. Rather-lovers, Rather-haters, and those still curious to know more will not be disappointed. In this book, Rather recounts his thrilling trek through Afghanistan after the Soviet invasion in 1980. He provides the full story behind his "confrontation" with Vice President George Bush over the Iran-contra scandal. And from Tiananmen Square to Red Square, from devastating floods in the Midwest to hurricanes in the Atlantic, he takes you with him as he scours the world for breaking stories and shows how and why what we see on our television screens winds up there. Here is his inside account of his interview with Saddam Hussein, the first by any American after the invasion of Kuwait. Here are his candid reflections on returning to Vietnam with General H. Norman Schwarzkopf - the first time back for both men. Here is a chance encounter with Mikhail Gorbachev inside the Kremlin. And here are his observations on the aftermath of the Cold War, the fall of the Wall in Berlin, and the present strife in the former Yugoslavia. Rather laces the narrative with short pieces on subjects ranging from encounters with two very different late-night dictators - Fidel Castro and David Letterman - to the real story behind the so-called "six-minute blackout" in Miami, the night CBS put the pope on hold to finish a tennis match. From Des Moines to Dhahran, from Somalia to Sarajevo, Dan Rather has an eye and ear for the human dimensions of the stories that grip the world. He also knows how to tell riveting tales about television news. In The Camera Never Blinks Twice, Rather pays homage to some of the all-time greats of broadcasting - including Murrow and Sevareid - and to all the courageous journalists who risk their lives to bring home the news. And he doesn't pull any punches in his assessment of world leaders, government officials, the press - or himself.

Title: The Camera Never Blinks Twice: The Further Adventures of a Television Journalist

Author: Dan Rather with Mickey Herskowitz

The Camera Never Blinks Twice: The Further Adventures of a Television Journalist