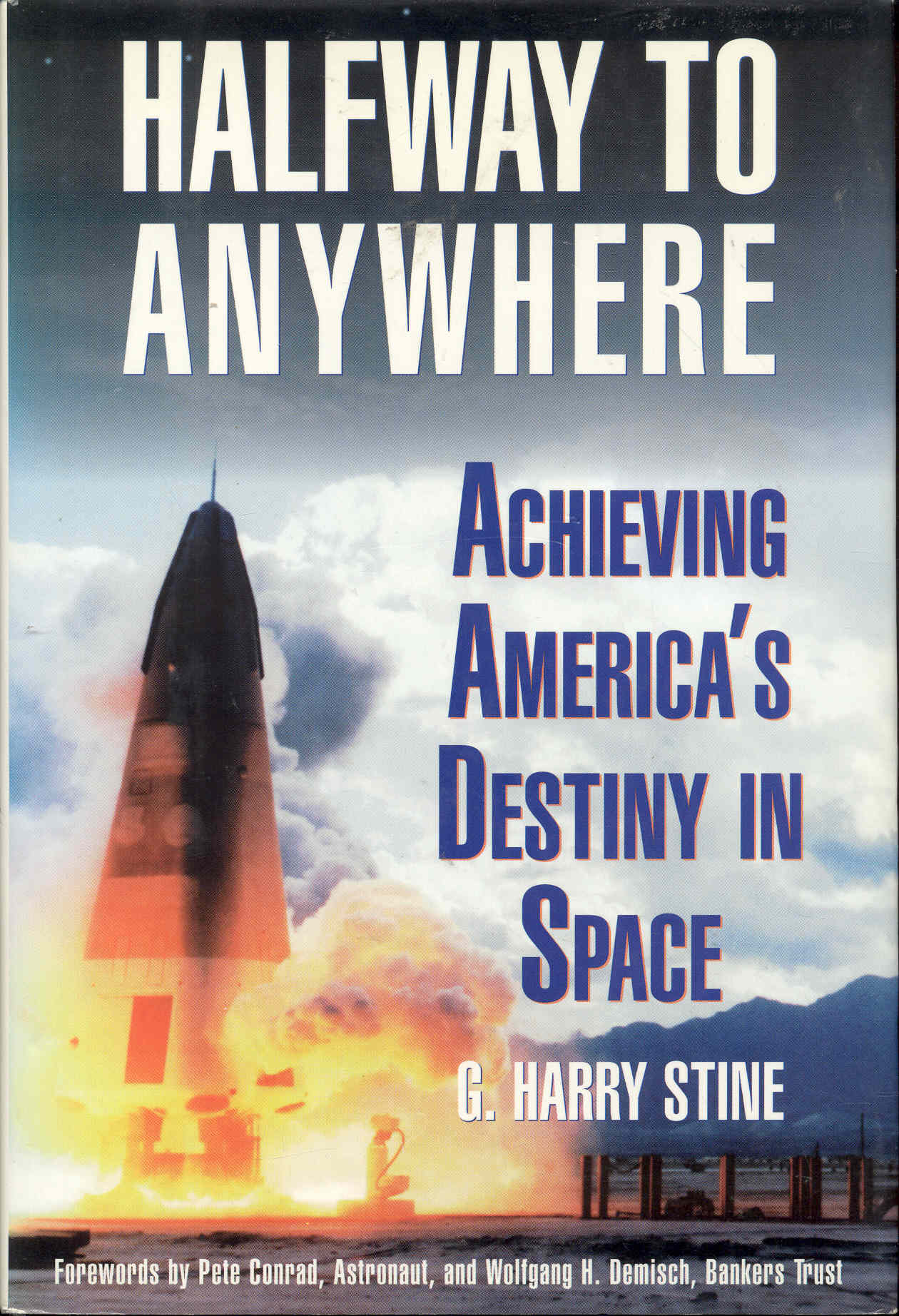 BZ1 - A first edition (stated with complete numberline) hardcover book SIGNED by G. Harry Stine on the title page in very good condition in very good dust jacket that is mylar protected. Dust jacket has some wrinkling and chipping on the edges and corners, some scattered scratches and rubbing, light tanning and shelf wear. Book bowed, some bumped corners, tanning and light shelf wear. 9.5"x6.5", 304 pages. Satisfaction Guaranteed. George Harry Stine was one of the founding figures of model rocketry, a science and technology writer, and (under the name Lee Correy) a science fiction author. After White Sands, Stine was employed at several other aerospace companies, finally ending up at Martin working on the Titan project. This job was short-lived: he was abruptly fired in 1957 when United Press called him for a reaction to the launch of Sputnik 1, and he repeated to them a passage from his just-published book Earth Satellites and the Race for Space Superiority, in which he wrote, "For the first time since the dawn of history, the Earth is going to have more than one moon. This is due to happen within the next few months - or it may have already happened even at the time you are reading this." The next day he was told to clear out his desk. Back in his days at White Sands he had handled inquiries from young people concerning rockets, and early in 1957 he wrote an article for Mechanics Illustrated about rocket safety. Shortly thereafter he received a letter from Orville Carlisle, who had begun making small models and, more importantly, replaceable solid fuel engines to power them. Stine was impressed with the samples that Carlisle had sent him, and wrote a cover article for the October MI issue about them. After the Martin firing, he contacted Carlisle and the two of them formed Model Missiles Inc., the first manufacturer of model rockets and their engines. Stine also founded the National Association of Rocketry (initially called the Model Missile Association) and wrote the safety code which became its centerpiece; he served as its president until the late 1960s. MMI was short-lived, as they were unprepared to handle the level of business they attracted and because of some poor business decisions. Issues with the production of early engines caused them to seek out Vernon Estes, who came to them in the summer of 1958. Estes's design and construction of "Mabel", the first engine-manufacturing machine, was the foundation of his success and put Estes Industries in a dominant position in the hobby which it was never to relinquish. Stine continued to work to popularize the hobby, writing the Handbook of Model Rocketry in 1965, which went on through seven editions over the years. He returned to the aerospace industry, continuing to write under his pen name, including a Star Trek novel called The Abode of Life and the original novel Shuttle Down. Under his own name, he was a regular science-fact columnist for Astounding and its later successor Analog, where his intriguing articles were in a position to influence two generations of budding scientists, social thinkers and film artists. He was a consultant to CBS television news during the Apollo program, along with Lindy Davis, Charles Friedlander and Richard C. Hoagland. Stine would also occasionally advise Rick Sternbach and Mike Okuda in their work for Star Trek: the Next Generation as technical artists and advisors, and was credited in Star Trek: The Next Generation Technical Manual for that assistance. The character named "Harry Stein" in the novel Stardance (by Spider Robinson and Jeanne Robinson) is a homage to Stine.